I’ve had the pleasure of scoring these features recently

A feature fiction film about witch camps in Africa following young Shula who has been accused of being a witch. The score ranged from Vivaldi to rap, country to atonal jazz. The whole film had a very original feel to it and the use of music was always carefully “skewed” to the narrative to fit with the off the wall, deadpan comedy about a very serious and tragic situation. Premiered at Cannes film festival 2017.

Oh no not another arthouse Thai mid-life crisis road trip with an elephant movie I hear you cry! Honoured to write music for Kirsten Tan’s (Singapore) very original debut feature. Thana, an architect who feels he has been spewn out by the city he’s worked for his whole life, discovers his childhood pet Pop Aye the elephant and sets off across Thailand to take him back to their childhood home. The score for this was mainly in the 60s Surf guitar realm with some Morricone cowboy moments, offsetting the sweeping Thai countryside and fitting with the rediscovered youthfulness and sense of adventure from our lone cowboy Thana and his steed, Pop Aye. Premiered at Sundance Festival 2017 picking up the Best Screenplay Award. 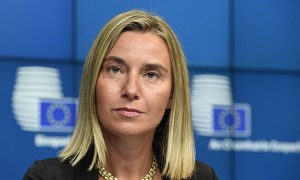 A feature documentary for Annalisa Piras and Springshot Productions following Federica Mogherini (picured) High Representative of the European Union for Foreign Affairs and Security Policy . Federica has the momentous task of overhauling Europe’s defence strategies dealing with issues including terrorism, immigration, conventional and asymmetric warfare. The score gave me the opportunity to get experimental and dystopian whilst trying to keep a European flavour, in keeping with it’s cultural breadth and historical depth. For forthcoming broadcast across Europe including Sky, ARTE and SVT.